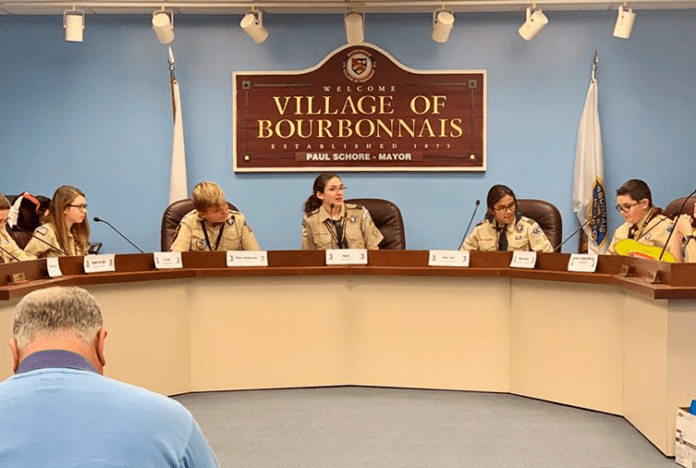 Bourbonnais, IL – Scout Day returned as part of ‘Scout Week’ at the Village of Bourbonnais as scouts shadowed village officials on Wednesday afternoon followed by a simulated board meeting.  The village is a long-standing supporter of scouting, and its efforts to build character, conduct, patriotism and service to become dedicated and responsible citizens.

The Rainbow Council of the Boy Scouts of America and its 160 Cub Scout Packs, Boy Scout Troops and Explorer Posts in Kankakee, Will and Grundy Counties are celebrating over 100 years of service. There are approximately 4,500 youth members in the in the Rainbow Council, of which Cub Scout Pack 324 – chartered in 1954, and Boy Scout Troop 324 – chartered in 1958, are currently chartered by the citizens in the Village of Bourbonnais.

“For over 35 years, the Village of Bourbonnais has been a proud supporter of Scouts through various events including this one,” explained Mayor Paul Schore. “Scout Week and Scout Day provide boys and girls with hands-on learning experiences which are beneficial for preparing youth for the future.”

Topics of discussion during the simulated board meeting included public safety, parks, a drive-in theater and a Chick-fil-A.