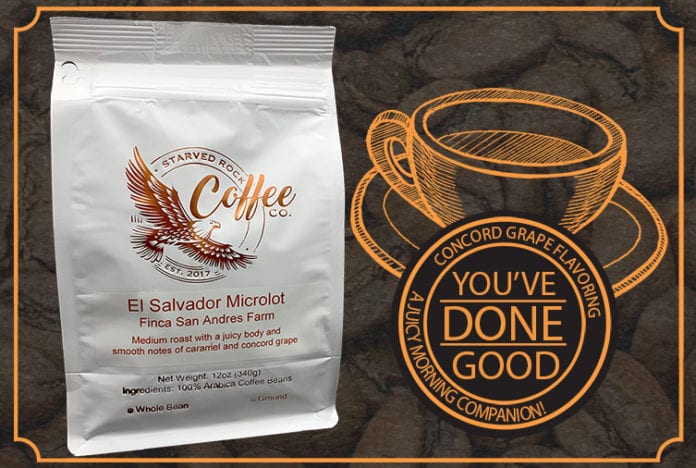 Crunching into that first bagel bite in the morning is a reward. It’s a reward that says, “You’ve Done Good” just for taking the effort to take that first brave step towards a new day. I know most people wouldn’t think that way, but I do. Because when you can salivate over the simple things, life becomes so much more enriching.

Today’s coffee comes to us from Starved Rock Coffee Company. Their choice blend is the El Salvador Microlot from Finca San Andres Farm. A medium roast with a juicy body and smooth notes of caramel and Concord grape.

With that first sip, the grape does a cultivation of its own with your taste buds and calls back for more. What does that say when an agent of dehydration tells you, “I’m juicy!”

Medium roasts aren’t my blend of choice. I’m more of a dark roast with two shots of espresso sort of guy because I like my coffee to pack a punch and deliver when I need it. But on a morning when I’ve done my work and can take an early lunch, the medium roast is a well-earned companion.

The Arabic beans help reflect the conversational tone that is Starved Rock Coffee Company. A naturalized candidate that enriched the community experience, be it getting up for a hike at your favorite State Park, or just kicking back on the porch with friends on a cool August morning.

The grape resonates a pallet rollback and enriches the morning air as you take that mid cup sip, reminding you more of a vineyard tour blend than something that would come from your own home.

As a medium roast, it’s no caffeine packed experience, but it does its job to gently awaken your spirit for the second half of the day, rather than push hard into it.  Relaxed, engaging and local. It’s a medium roast like this that makes me think, I may have to change that “dark roast” mentality.

Time for a juicy second cup.

Pierogi Fest postponed till 2021 due to COVID-19

Build a Better You with Toastmasters