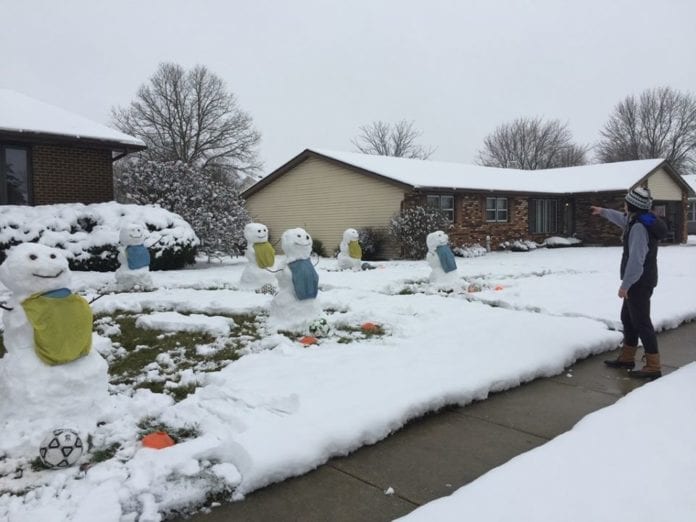 As teachers, coaches, and so many related professionals find ways to adapt to the new, albeit temporarily normal, one Bourbonnais soccer coach used the last gasp of winter to send a few instructions to her players, during their time of confinement.

Katie Gremar, who is the coach of the Bourbonnais Upper Grade Center soccer team, said “I’ve been sending emails every week since we’ve been out of school to my players just to check in with them and see how everyone is doing.

Gremar, who played Midfielder at Olivet Nazarene University as recently as 2009, said “Monday morning the snow was perfect for packing, so I thought it would be fun to build a little snowman soccer team, take a few pictures pretending to coach them, and then email the pictures to my players”.

According to the school’s live feed on its website, the team had tryouts and final rosters established in late February and early March. However, with the Covid-19 pandemic spreading and canceling so many events, Gremar used this creative approach to keep in touch with her players while the fate of their season, as well as their school year, hangs in the balance.

AMERICAN DIARY: To be black and a journalist at this moment

Olivet Nazarene brings nearly 5,000 students back to campus in Fall...

Salons and spas: Are Kankakee’s shops truly ready to reopen?