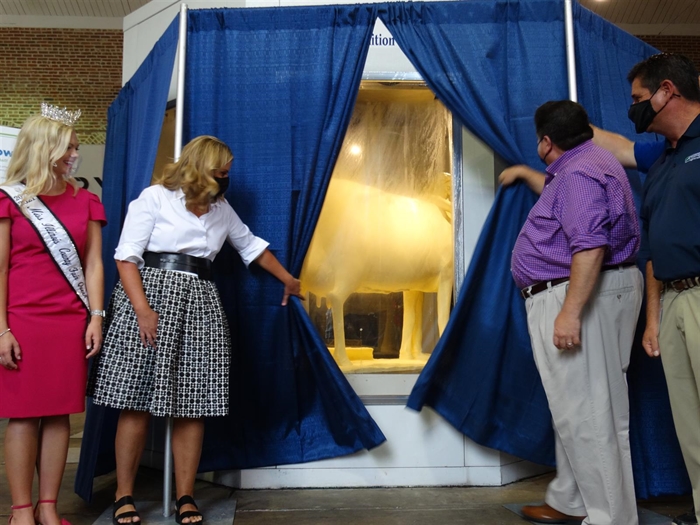 SPRINGFIELD – The final preparation for the opening of the 2021 Illinois State Fair took place Wednesday with the traditional unveiling of the butter cow.

This year’s sculpture, which marks the 100th anniversary of the fair’s butter cow, is entitled “Embracing Tradition.” It features a dairy farmer embracing a cow. Hidden within the sculpture are 13 hearts, signifying the 13 essential nutrients found naturally in milk.

“After a year where the world stopped, I felt including an exhibitor embracing the cow signifies the joy our youth are experiencing as they return to the fair,” butter cow sculptor Sarah Pratt, of Iowa, said in a news release. “You only get one chance to celebrate the 100th anniversary and I hope this year’s Butter Cow will invoke those feelings of nostalgia people have experienced for generations.”

“What an ‘udder’ delight to be here,” Kessler quipped before the unveiling. “With this year marking the 100th anniversary of the unofficial trademark of the Illinois State Fair, you ‘butter’ believe that fairgoers are excited.”

The fair officially opens on Thursday. Entry gates open at 7 a.m. Pritzker and other state and local dignitaries will take part in a ribbon cutting ceremony at the main entrance at 3 p.m. That will be followed by the traditional Twilight Parade, scheduled for 5:30 p.m.