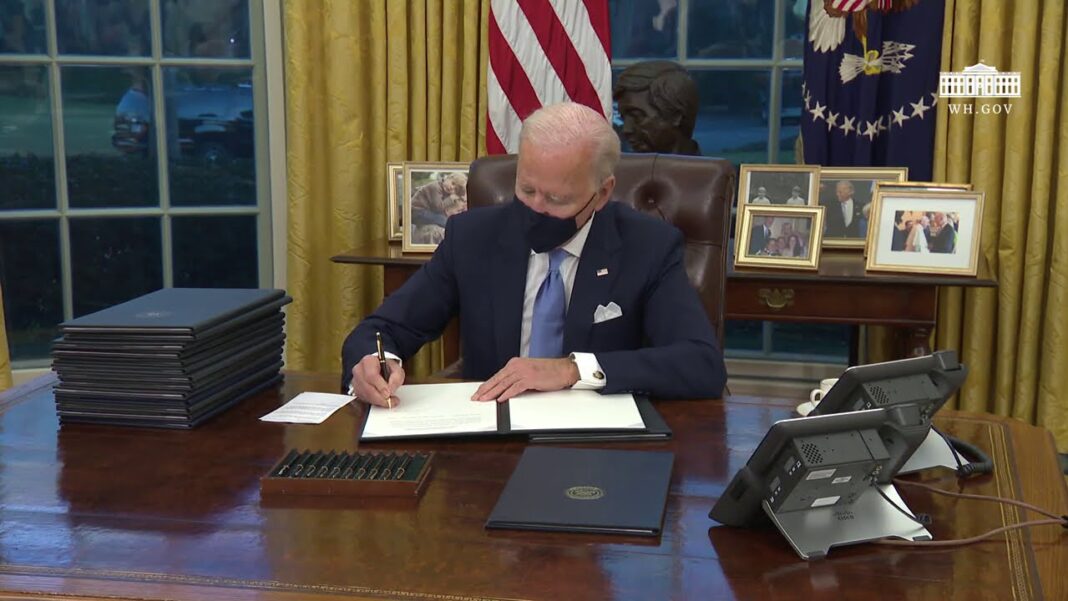 (The Center Square) – Wearing a mask at a desk in the Oval Office, President Joe Biden signed a federal mask mandate Wednesday as his first executive order.

Biden’s first event broadcast online since taking the oath of office earlier in the day addressed things he said are “bold and vital” and starting points to “rebuild the backbone of the country, the middle class” amid COVID-19.

As media were being ushered out following the signing of three orders, Biden was asked what Trump wrote in a letter a former Trump staffer acknowledged the former president left.

“The president wrote a very generous note, but because it was private, I won’t talk about it until I talk to him, but it was generous,” Biden said.

During the event, which lasted nearly three minutes, Biden signed three measures from a stack of more than a dozen executive orders.

“They are important, but we will need legislation for a lot of things we want to do,” Biden said.

In front of cameras, Biden briefly talked about responding to the pandemic. He adjusted his mask several times before signing the first order that he said requires “masks be worn, social distancing, on federal property, interstate commerce, etc.”

Biden had said he wants a mask mandate for the first 100 days of his administration as COVID-19 vaccines continue to be delivered across the country.

A second order he signed provides “support for underserved communities,” he said.

“And we’re going to make sure we have some bedrock equity, equality in how we treat people in health care and other things,” Biden said.

As he motioned to a stack of other orders he was expected to sign, he said a third would have the U.S. “rejoin the Paris Climate Accord as of today.”

Trump exited the Paris Climate Accord among some of his first executive actions in 2017. The former president said the treaty was not favorable to the United States.

Biden’s event Wednesday ended without any further detail on other orders.

Media reports indicate other executive actions include ending a national emergency that allowed money to be used for border wall construction, work at preserving the Deferred Action for Childhood Arrivals program and orders reversing Trump orders on deportations, among others.

Another area Biden is addressing deals with extending deferral of student loan repayments to Sept. 30 and extending foreclosure and eviction prohibitions until March 31.

Volcano erupts in United States for first time since 2018