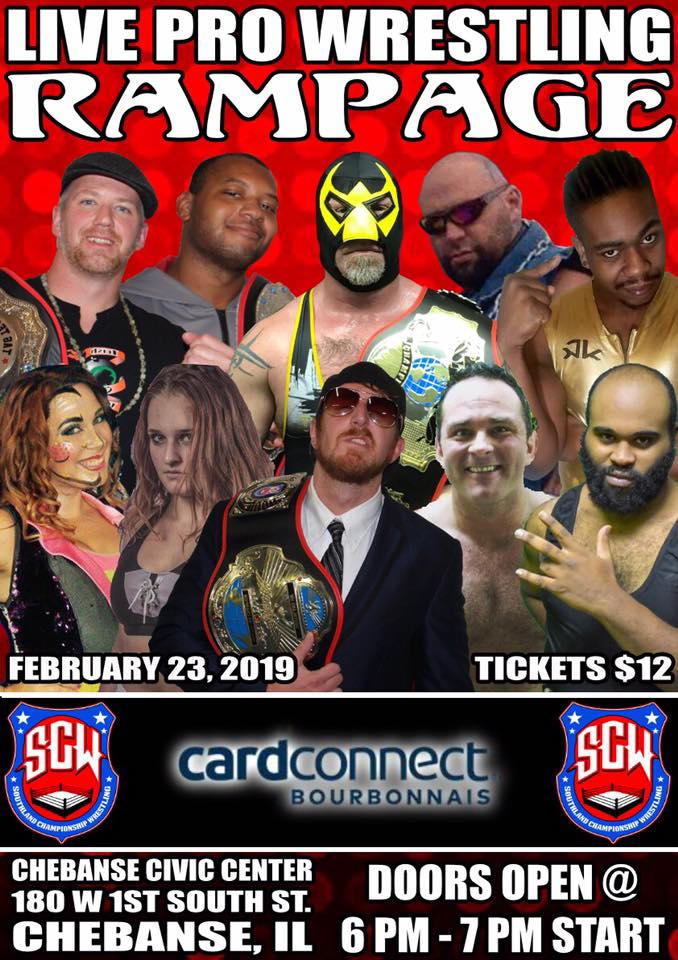 If you’re looking for something to do February 23, 2019, Southland Championship Wrestling (SCW) presents Rampage live at the Chebanse Civic Center. Doors open at 6 p.m. with a bell time of 7 p.m. SCW is a live pro wrestling event that the whole family can enjoy. SCW is a high intense show that will keep you on the edge of your seat with its action-packed matches.

Saturday night, Bane X will defend his Genesis title against Paradox. You will also see J. Harris vs. RK Savage in a singles match. Evil Sierra will take on Moxie Mollie in a singles match. Black Irish will be in tag action, and the main event will spot light champion Maverick Cage as he takes on Nick Cutler in a no disqualification match. Paine said “fans can expect lots of high flying and hard-hitting action when they attend a show”.

If you are interested in training to be a wrestler, manager, referee or valet, contact Paine or Genesis Mixed Martial Arts and Fitness on Facebook. SCW is involved in fund raising for local and national charities. Contact Paine for fundraising event information. SCW has a concession stand and merchandise available for purchase. Tickets for an SCW show are $10 in advance and $12 at the door. Tickets can be purchased at Genesis Mixed Martial Arts and Fitness, Fit Body U and Glass Works.

The Kankakee County Health Department is looking into multiple reports of health violations from a number of restaurants across Kankakee County.
Read more
Coronavirus National