COVID-19 Vaccine Phase 1B begins in Illinois next week with Kroger, Jewel-Osco part of network

Two men wanted in connection with home invasions in Bourbonnais

Man dies after vehicle collides with Train in Dwight 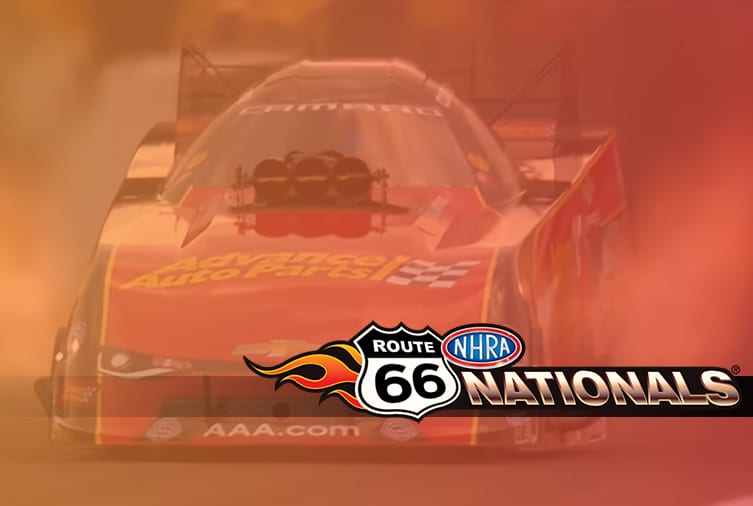 To kick the weekend off, the first-ever Burnout on the Bases Softball game will take place Thursday evening, featuring the Joliet Slammers, City of Joliet celebrities and NHRA drivers and dignitaries as they tear it up on the bases to celebrate the Route 66 NHRA Nationals at Joliet’s Route 66 Stadium.

Simultaneously, Erica Enders will make a special appearance at Hollywood Casino on Thursday, May 30, where she will sign autographs and interact with fans. The opportunity to meet the first female Pro Stock Champion is open to all fans of all ages.

The full line-up of action continues Route 66 Raceway on Friday with nitro under the lights followed by a jet car finale, featuring two jet dragsters that will rocket to speeds near 300 mph. ProJet Motorsports’ “Hot Blade” piloted by Al Zukauskas (Al Z) and Team Heat’s “Fifty Caliber” driven by Scott Holdridge. Hot Blade features a Pratt & Whitney J60/JT12 engine used in Navy T-2 Buckeye fighter jets. This engine produces 6,000 horsepower with 4,500 pounds of thrust at approximately 19,000 revolutions per minute (RPM). The dragster hits over 100 mph during the first 60 feet and under one second.

Then, on Saturday at 2:00 p.m., NAPA Auto Parts Funny Car driver and official 2019 Route 66 Raceway Kid’s Club Crew Chief Ron Capps, will sign autographs and take on challengers in the tree competition to see who has the best reaction time.

Following the festivities on All-Star Saturday, “The Blooze Brothers,” a Blues Brothers tribute band, will perform on the north side of the grandstands. All fans are welcome to attend, grab a drink and enjoy the familiar tunes of Sweet Home Chicago, Everybody Needs Somebody and Jailhouse Rock.

Fans dive deeper into the history of the Joliet area by taking a historical ride down the Mother Road as they view the Joliet Area Historical Museum’s Route 66 display with Route 66 Raceway’s Fan Pit Stop. From the Santa Monica Pier in California to downtown Chicago, there is something for everyone on this historic route.

In addition, premiere motorsports artist Kenny Youngblood will be on-site at the Route 66 Raceway Fan Pit Stop throughout the weekend personalizing unique prints for fans to commemorate their time at the race track. Fans can obtain a unique print from Youngblood during the following dates and times:

Before the racing starts on Sunday, fans have the opportunity to walk the track and be front-row-center for pre-race ceremonies at 9:45 a.m.

Then, a native-born Chicagoan, Wayne Messmer will sing this year’s national anthem. Messmer was recognized early as having a natural gift and talent, his voice led him to follow opportunities leading to a successful career as a professional speaker, broadcaster, singer and announcer with various Chicago sports teams, most notably the Chicago Cubs, Chicago Wolves Hockey, and formerly the Chicago Blackhawks. Wayne is also a well-known voice on the Chicago radio scene. Included among his most memorable performances are the NHL All-Star Game at Chicago Stadium and as The Voice Of Victory at the 2016 World Series at Wrigley Field.

Fans truly will not want to miss out on Championship Sunday it is the day that determines who will take the coveted top place in the Winner’s Circle for the top four Pro Classes (Top Fuel, Funny Car, Pro Stock and Pro Stock Motorcycle). Fans can now partake in the celebration as the staging lanes will open immediately following the on-track action for those in the grandstands to get up-close as the winners receive their Wallys.

No matter their seat location, fans can stay in the loop and witness all the action on the big screen as Route 66 Raceway will feature a second screen this year.

COVID-19 Vaccine Phase 1B begins in Illinois next week with Kroger, Jewel-Osco part of network

Two men wanted in connection with home invasions in Bourbonnais

Man dies after vehicle collides with Train in Dwight