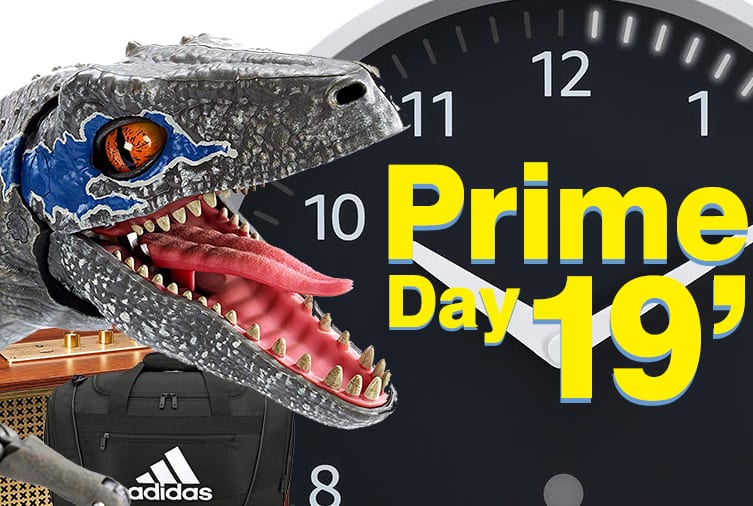 It’s the first day of Prime Day 2019! The deals are flying out faster than a mad tweeter and we’re posting the best right here!

Fire Sense Hammer Tone Bronze Patio Heater: $129.99 (savings $100) – Everyone loves an outdoor heater! Now grab one for fall before they get jacked up beyond sensibility in a month!

Ring Video Doorbell Pro with Echo Dot (3rd Gen) – Charcoal: $169.00 ($129.99 savings) – Remember a few months back when that meteor came over Illinois and only the people in the Northern Suburbs got a chance to catch it on their doorbell cam? Well, now you can be one of those people who always is “watching the sky!”

AmazonBasics Microwave with Echo Dot (3rd Gen.) – Charcoal: $59.99 ($49.99 Savings) Honestly, who’s the crazy nut job that thought it would be fun to control the microwave with their voice? For those of you who want to live the dream, now’s the time.

Dyson Ball Animal 2 Total Clean Upright Vacuum Cleaner, Blue: $349.99 ($249.99 savings) So here’s something on the list I have quite a lot of experience in, not so much as using them as I do selling them. Dyson has always set the bar for as far back as I can remember. Can’t beat the simplicity of the ball…except when it gets animal instincts. Then watch out.

Echo Wall Clock – see timers at a glance – requires compatible Echo device: $23.99 ($6 savings) Hey Alexa! Where you ever too lazy to talk to a human being and instead would rather glance at something simplistic to know how much time is left on a timer? Take yourself back to the days before Alexa and splurge if you’re feeling DTF (Down to Forget)

Instant Pot Smart WiFi 6 Quart Multi-use Electric Pressure, Slow, Rice Cooker, Yogurt, Cake Maker, Sauté, Steamer and Warmer, Silver: $89 ($82.95 savings) Really so now we’re giving pressure cookers access to the internet? Okay…that’s actually very scary for so many reasons. For the person who has the time to prep the dish but not press buttons, this one’s for you.

Adidas Clothing & Gear (20-50% savings) really it’s just all over the place. It sort of feels like one of those sales that some big wig at the top was just like “Hey! Tomorrow’s Prime Day! We should probably do something huh?” and slashed the back catalog. Nevertheless, there is some cool stuff hidden in here.

Under Armour Clothing & Gear (Save up to 30% is advertised) Yet the savings bonces around every which way. There is some stuff on the page up to 50% off, some stuff is 20% I think I saw one that was 7%. Really it’s just a where is the armor pierced and how much is leaking out sort of scenario.

Echo Dot: $22 (saving $27.99) – yes the little booger will eavesdrop at every opportunity unless you make her red in the face.

Echo (2nd Generation): $49.99 ($50 saving) – it’s half its price and twice as big which for some reason some people still think is awesome…if your big into music, go for it…if not, just don’t.

PlayStation Classic: $39.99 ($20 savings) When the Playstation Classic came out it retailed for just under $100 but lacked the library built in to support it. However, with games like the original Metal Gear Solid, Final Fantasy VII, and Tekken 3, it still pays for itself in entertainment at this price.

Jurassic World Toys Alpha Training Blue Dinosaur: $99.99 ($150 savings) Not necessarily a Prime Day Deal…but if we didn’t tell you about your very own robotic dinosaur you could own TOMORROW for less than $100, we wouldn’t be doing our jobs.

A World Without Batman

Buzz From Above: Drone Flying Adventures in the Kankakee River Valley