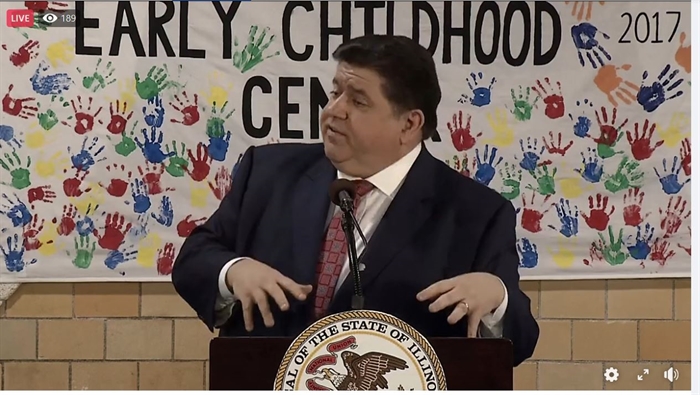 SPRINGFIELD – Gov. JB Pritzker took to the road Monday to urge local school districts in Illinois to carefully target the roughly $7 billion in federal funds they will soon receive in order to help students overcome the learning loss they may have suffered during the pandemic.

“We’re all wondering if this was a lost year for our children,” Pritzker said at an early childhood learning center in the Champaign school district. “We worry if a year’s worth of online classes and virtual play dates will impact their future in some negative way in the future.”

Pritzker highlighted a report released last month by the state’s P-20 Council, the Learning Renewal Resource Guide, which outlines many of the issues schools around the state are likely to face as they prepare to return to full in-person learning and some of the strategies they should consider.

Those strategies include things like diagnostic testing to get more precise measurements of where students are in their academic progress; offering more tutoring, counseling and afterschool programs; and possibly even lengthening the school calendar to add more days of school.

Most of the money schools stand to receive – about $5 billion of it – will come through the recently-passed American Renewal Plan. The rest is the result of two earlier rounds of federal relief funding.

According to guidelines from the U.S. Department of Education, those funds may be used for things such as buying personal protective equipment or acquiring additional space to ensure social distancing in classrooms, hiring additional staff to address learning loss, implementing strategies to address the social, emotional, mental health and academic needs of students, and funding afterschool and other extended learning or enrichment programs.

Schools can also direct the funds to target populations that have been the most disproportionately affected by the pandemic such as students from low-income backgrounds, students of color, students with disabilities, English language learners, students experiencing homelessness and students with inadequate access to technology.

Suzan Zola, superintendent of Champaign CUSD 4, which stands to receive about $39 million in federal aid, said improving student access to technology is among her district’s top priorities.

“Since the beginning of the pandemic we have invested, and will now be able to continue to invest in improving access to technology for students and staff,” Zola said. “There should never be a time again where students don’t have access to a computer and internet connection in their home.”

What remains unclear, however, is how long it will be before all schools can fully reopen. The Illinois State Board of Education has left that decision largely up to local school boards.

According to the Illinois Department of Public Health, as of Monday, just over 72 percent of seniors age 65 and over in Illinois, and 40 percent of all adults age 16 and older, have received at least one dose of vaccine.

But Pritzker said that a recent uptick in new cases and hospitalizations is still preventing the state from entering Phase 5, or full social and economic reopening.

“You know, we’ve seen this before. I think other places in the nation have had three surges. We’ve had two,” Pritzker said. “We’re now seeing a rise in cases here. But these things come in waves. I am hopeful that with the rising number of vaccinations we’re doing – we’re averaging over 100,000 a day – the increasing number of people who are fully vaccinated, at the same time that we’re dealing with a surge, I’m hoping that we can sort of overcome the surge for the very first time ever.”

IDPH: All Illinois residents eligible for COVID-19 vaccine next Monday

After 26 years with Kankakee County Museum, Director to Retire