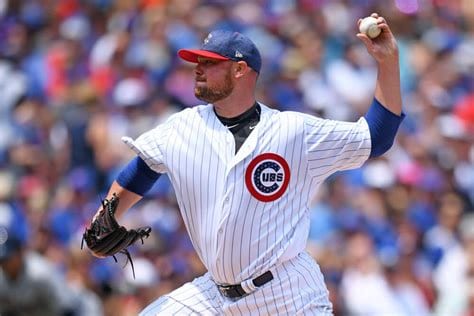 Spring training for Major League Baseball is finally here. With pitchers and catchers reporting for duty next week. Here you will find a break down of the Chicago Cubs starting five pitching rotation. We will look at who the Cubs starting five will be. If you can expect to see any new faces in the starting five, and give our outlook for the 2019 season.

The Chicago Cubs starting five pitching rotation will consist of the same pitchers the Cubs had in the 2018 season. That rotation was left-hander Jon Lester, right-hander Kyle Hendricks, left-hander Jose Quintana, left-hander Cole Hamels and rejoining the team from his injury last year is right-hander Yu Darvish. The Cubs also have left-hander pitcher Mike Montgomery who the can slip into the rotation if an injury should occur. Right-hander Tyler Chatwood could also be utilized if injuries arise.

The Chicago Cubs did not add any new faces to their starting five pitching rotation for the 2019 season. If injuries should occur, they will look to the bullpen or the minor leagues to fill the voids. Like mentioned Mike Montgomery and Tyler Chatwood could be utilized for injuries. Adbert Alzolay would most likely be the first pitcher from the minors to be called up if an injury should take place to one of the starting five. Alzolay(23) has a fastball that is clocked in the mid 90’s, and his breaking ball is pretty nasty as well. Other notable names if injuries should plague the Cubs starting rotation are, Duane Underwood, Alec Mills and Jen-Ho Tseng. All four pitchers play for Triple-A Iowa.

Jon Lester will look to continue anchoring the pitching rotation. Lester(35) pitched 32 games last year and his record was 18-6. Lester had an ERA of 3.32. Lester went on to appeare in his 5th All Star game in 2018.

Kyle Hendricks(29) will look to carry his consistency from 2018 to the 2019 season. Hendricks pitched in 33 games last year, he had an 14-11 record. Hendricks had an ERA of 3.44. Hendricks had a very strong second half as he kept the team above water as the offense sort of disappeared.

Yu Darvish(32) who signed with the Cubs last year only appeared in 8 games. Darvish’s record was 1-3 and he had an ERA of 4.95. Darvish looks to bunch back in 2019 from an injury that he sustained to his elbow last year that caused him to have surgery last September. It is reported that Darvish is entering spring training at 100%.

Jose Quintana(30) pitched in 32 games last year and had a 13-11 record. Quintana had an ERA of 4.03. If Quintana is dialed in, he can be a very dangerous pitcher. Cole Hamels(35) was traded to the Cubs from the Texas Rangers in late July of last year. In 12 starts for the Cubs, Hamels had a 4-3 record and had an 2.36 ERA. The Cubs starting five rotation was very strong in 2018. The Cubs will look for them to be just as strong if not stronger in 2019.

NHRA Nationals Return to Route 66 Raceway for four days of...