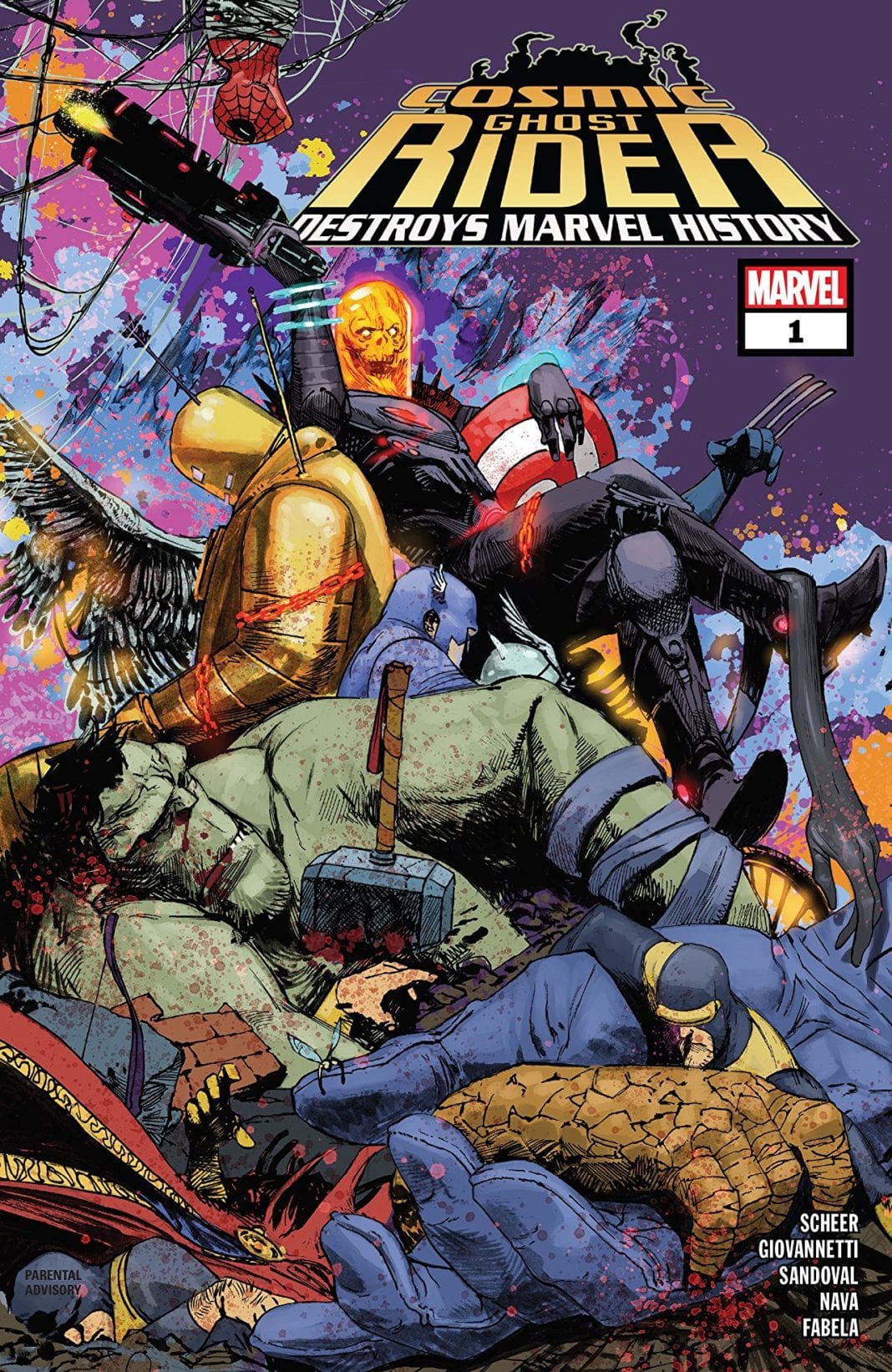 Hey there comic fans and readers! Marvel Comics has launched a new series, “Cosmic Ghost Rider: Destroys Marvel History”, (Written by Paul Scheer and Nick Giovannetti, pencils by Gerardo Sandoval, inks by Victor Nava, and Antonio Fabela on colors).
Cosmic Ghost Rider first appeared in November of 2017 in “Thanos” issue 13 and was an overnight success thanks to the writing of Co-Creator Donny Cates. That Comic is set in the distant future and is that of Frank Castle, who you might know as The Punisher. In that story, the Punisher becomes the Cosmic Ghost Rider after making some bad deals with the Devil, Galactus, and Thanos.
In the premier issue of “Cosmic Ghost Rider: Destroys Marvel History, writers Scheer and Givannetti introduce us to the older, haggard, Frank Castle, now the Cosmic Ghost Rider, revisiting the past before the incident that would turn him into the Punisher.
The issue begins with Frank visiting his old home in New York. After knocking on the door he realizes it may have dire consequences to the timeline if he reveals his true identity to his family, he enters his old home under the disguise of a distant made up Uncle. In an attempt to bond with his son, Frank reveals himself to be the Cosmic Ghost Rider and tells him about all the key events in the Marvel Universe he’s been a part of. Scheer and Giovannetti brilliantly pull at the heartstrings and play those sentiments well against the reader, who knows that the event everything in Frank’s life is coming and by allowing Frank’s humanity as he attempts to connect with his son. There is a nice nod to the young history of the Cosmic Ghost Rider with a cameo of Donny Cates as well. The art even mimics the famous Kirby style as seen in the early Fantastic Four comics, which adds to the impact of the visual storytelling.
After the visit with his son, it is quickly revealed on the reader as Frank’s true intentions are revealed, that even prompts a visit from Utua the Watcher. The cliffhanger leaves the reader with a glimpse in the dark. We know the Marvel Universe is going to change in a big way with a ripple effect on all timelines and any character is at stake. Frank doesn’t care about abusing his powers as long as he gets what he wants.
With a 4 out of 5 stars, pick up the first issue of “The Cosmic Ghost Rider: Destroys the Marvel Universe” at your local comic shop. The teaser for the second issue leaves us with a teaser that implies some Spider-Man history is next up for destruction. Need more Cosmic Ghost Rider and can’t wait to for the next issue? Check out the Cosmic Ghost Rider in action in Donny Cates run of Guardians of the Galaxy.